Suzanis of Central Asia Great ideas to Style your Home with Textile, Decor and Furnishings 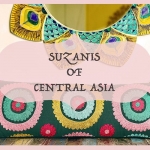 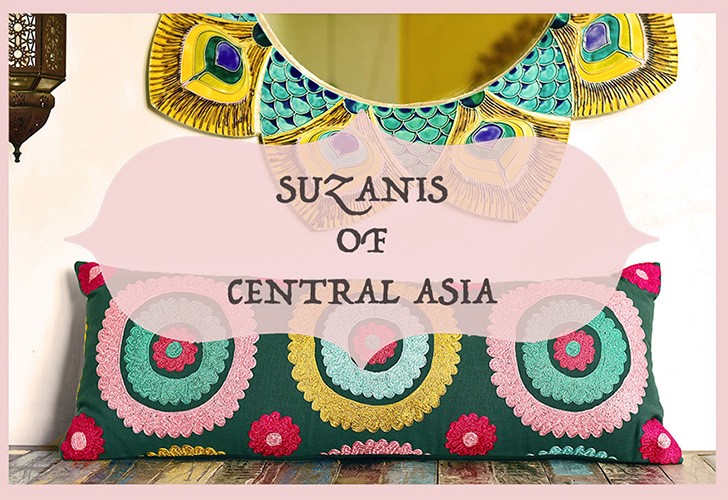 Needlework is not merely a means of ornamentation. The fabrics are also threaded with stories of the community and nothing is without history.

When I look at an embroidered cushion or rug, I see more than just a pretty piece of fabric. It gives me a glimpse into stories, history and creativity of the makers.

One of my favourite sources of inspiration have been the Suzanis of Central Asia. You will find it reflecting in a lot of my designs and in the pieces we do at Skyy.

The Story Behind  Suzani Embroidery

The roots of Suzani embroidery can be traced back to the Central Asian countries of Uzbekistan, Kyrgyzstan and Tajikistan. The word ‘Suzani’ actually comes from the Persian word for needle and needlework “suzanikari”.

Like in India, tradition plays a very important role in our lives. In the Central Asian countries, handcrafted dowry pieces was a sign of respect for both the families who were entering into marriage. These beautiful handcrafted dowry pieces were worked on by the mother and daughter for her wedding day to bring wellbeing into her married life ahead. When a girl was old enough, her grandmother and mother would share their secrets of the art of creating stunning embroidered pieces.

The Decline And The Revival

Over time, the production of textiles thrived in Bukhara and Samarkand and along the fabled Silk Road.The suzani motifs, colours, and composition acquired regional association.

When Russia invaded Central Asia all that changed. Craft production was forbidden and the ancient art form almost disappeared. It was only once the Soviet Union fell did the Uzbek artisans start the process of revival of this centuries-old art form.

Each suzani motif used is there to bring joy, fertility, long life, prosperity, fruitfulness, good health, hospitality etc, and to ward off all evil from the home. Do you know how many different forms of Suzani embroidery are there? Let me give you a little insight

The predominant embroidery technique used in a suzani is the chain stitch, done with an instrument called a tambour, a hooked needle (similar to a sharp crochet hook) that pierces the fabric and draws embroidery thread from behind through to the design side. In the chain stitch, a series of looped stitches form a chain-like pattern. The ilmok (a double buttonhole stitch) is also used to work the outlines. It is made using a plain needle. To fill in the outlines, the couching stitch is often used.

After so many years of working in the home décor industry both at home and internationally, this form of embroidery art remains my favourite. Which is why you can see it in so many of our products.

Our Suzani cushions are inspired by this ancient traditional art form. The Ura Cushion embroidered in rich blue colour and sea green accents, while the blue and aqua Tajak cushion cover is an intricate piece of tribal embroidery that’s been rendered contemporary by the colour palette used. Our beautifully embroidered Seran cushions team up beautifully with the Bukara and Davinia cushion covers.

So now that you know more about what the pieces that could adorn your homes, time to go shop for them on our site! Add a little history to your home with these stunning accessories.

No products in the cart.